South Korea is an East Asian country known for undergoing one of the fastest and most remarkable economic transformations in recent history. From being one of the poorest countries in the world during the 1960s, it has now risen to become the 5th largest economy in Asia and 11th internationally.

Technology is one of the key drivers behind South Korea’s rapid economic development. The country has one of the fastest internet connections and smartphone usage in the world. Recently, it has launched the first 5G network in Asia, which is expected to further propel its e-commerce market. Furthermore, South Korea has the highest government backing per capita for start-ups. Last year, the government pledged a $9 billion venture fund, supported by an initial $3 billion investment in 2015.

The other factor behind its economic success is the massive investment in “Hallyu” or The Korean Wave, one of the biggest cultural phenomena in Asia. In 2018, Hallyu exports had garnered over $9.48 billion to its economy, a 22.8% increase compared to the previous year.

The Digital Landscape of South Korea

According to We Are Social’s annual digital report in January 2020, South Korea has a total population of 51.52 million, with a 96% internet penetration rate or approximately 49.21 million internet users. The country’s official language is Korean.

Due to South Korea’s heavy investment in education, its literacy rate is at an impressive 98% which translates to a highly-skilled workforce and a tech-savvy market. 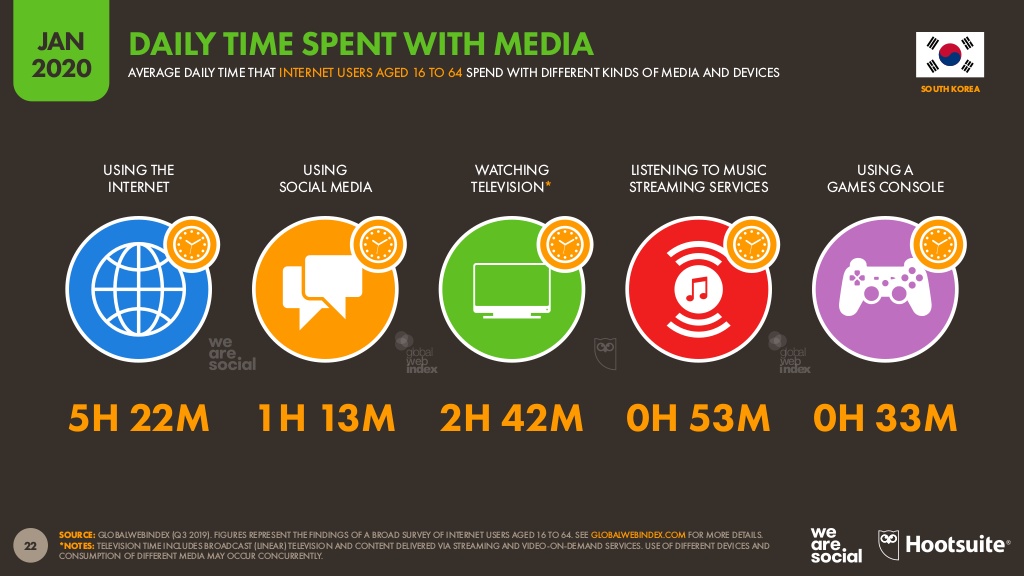 South Korean Internet users spend an average of 5 hours and 22 minutes every day online; however, only 1 hour and 13 minutes of this is spent on social media. More time is spent on watching television, streaming and video-on-demand services at 2 hours and 42 minutes. In line with its excellent IT infrastructure and high-speed technology, 98% of Korean households have regular Internet access, which has enabled the nation to have one of the largest internet penetration rates in the world. 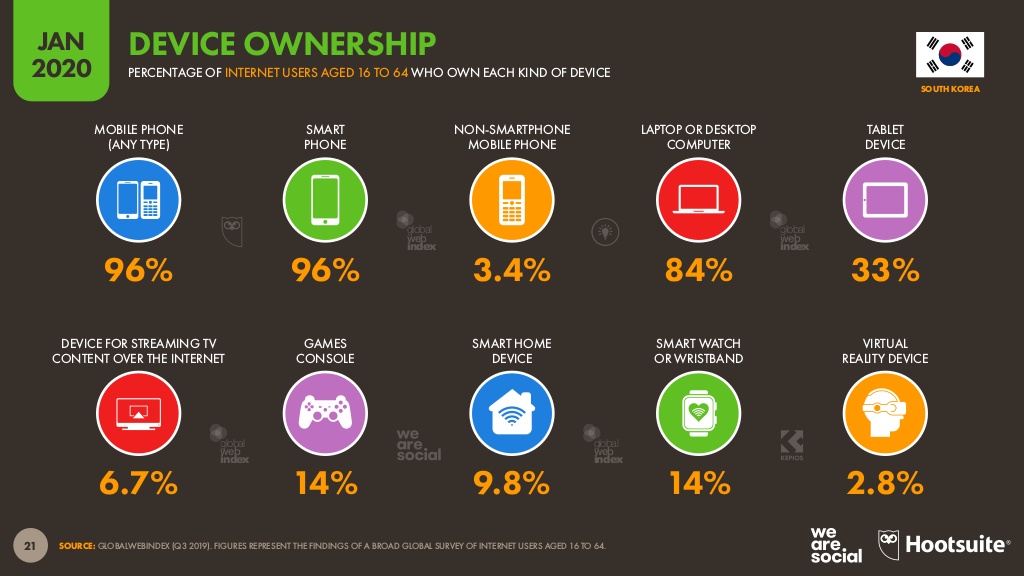 With mobile phones being the most popular type of device, South Korea has one of the highest smartphone usage rates in the world.

This has led to a burgeoning e-commerce market, wherein the residents show comfortability in online shopping. Oftentimes, Korean online shoppers would even compare the price points between local and international brands, demonstrating how well-versed they are with this sector.

Knowing the main channels in a country’s digital landscape and its appeal to the market will already do half the work in building your strategies. As of this year, here are some of South Korea’s most prominent social media platforms. 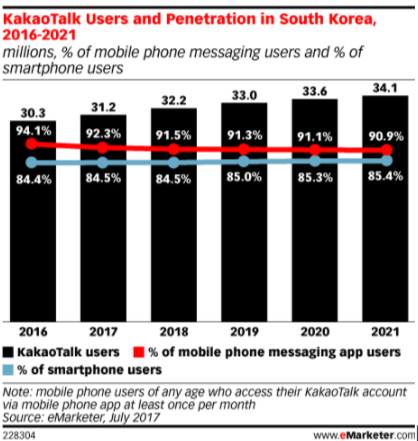 KakaoTalk is the biggest messaging app in South Korea. According to We Are Social’s digital survey in January this year, the app was used by 81% of the online South Korean market.. In eMarketer’s July 2017 survey, the app had over 32.2 million users in 2018, 91.5% of which were accessed through mobile phones and 84.5% through smartphones. It is expected that the user base will grow to 34.1 million by 2021.

The app is deeply entrenched into the daily lives of South Koreans. It has attained such a status in Korea through features such as games, a key component in Korean messaging. Even its sticker characters are found on many products sold in the country.

The app has since expanded to include more platforms such as a GPS app, taxi-hailing service app, trip planners, and even payment options, which furthers its image as a lifestyle brand in the country.

As in most countries, the video platform YouTube also dominates the South Korean online market with a user base of over 25 million. As of January 2020, the online video sharing platform surpassed KakaoTalk at over 83% of the country’s internet users.

In South Korea, promotion in YouTube most popularly takes form as influencer marketing. According to Google Korea in 2017, YouTubers with over 100,000 subscribers had a 1,275 reach, and those over 1 million subscribers reached as much as 100 channels.

Few countries in the world do not have Google as their top search engine. The same rings true in South Korea in the form of Naver, the country’s top search engine. However, it is more than just a site for South Koreans. Their online market uses it as a hub where users can view rich content and have search suggestions that are tailored to their interests. Naver also has multi-dimensional functionality in the form of its e-commerce and travel sites.

Compared to Google, Naver’s search algorithm is built around the Korean language. This allows the app to aggregate more relevant search results. Additionally, information like blogs, shopping, and virtually any web-based activity in Naver are generated in a human-friendly way.

Being a global powerhouse in the technological and industrial sectors, South Korea’s digital marketing realm is constantly changing. New strategies are continually being developed for each emerging technology; therefore, marketers must optimize these advances and be ready to adopt them into their strategies.

Having chaebols (large industrial conglomerates) such as Samsung and LG Electronics, it’s no wonder that mobile internet penetration in South Korea is one of the largest in the world at 82%. This means that Korea is the only country to have 100% of its residents own a mobile device. In fact, research shows that in 2018, 97% of 18 to 24-year-olds use their mobile device daily. Furthermore, smartphone usage is predicted to increase to 30% of total daily media time in the country by the end of 2019. Also, with the deep integration and significance of mobile messaging apps in the Korean market, it can be expected that smartphone time will further rise in the years to come.

As of late, the number of mobile searches in the Korean market has surpassed that of online searches. That emphasis on mobile is reflected in Kakao’s (previously DaumKakao) recent name change with the decision to take ‘Daum’ off its corporate name, demonstrating a will to focus more closely upon their mobile services. Naver and Kakao are both in pole positions when it comes to mobile, specifically to mobile messenger apps and mobile social network services, as well as financial technology and online to offline services, including simple payment services. While Facebook and Twitter are both present and popular, there are also local instant messaging platforms such as KakaoTalk and Line, a Naver product, that are used by a huge proportion of mobile users in Korea.

Along with the US, Japan, and China, South Korea is one of the leading countries driving the 5G industry. As mentioned before, it is also the first country to roll out the network in Asia. 5G has a hundred times more internet capacity than 4G and has reduced response time to just 1 millisecond and provides 20 times faster speed for data transmission. This means that a file as large as a 2-gigabyte high-definition movie can be downloaded in less than a second.

In line with this new era of 5G commercialization, Korean mobile operators are now working on developing 5G-compliant products and services, which are expected to become mainstream very soon. This is very important for services such as driverless cars which require real-time communication (RTC) capabilities. As such, there is much emphasis placed on the convergence of AI and 5G.

South Korea has also been aggressive with jumpstarting the AI industry in the country and has expressed its desire to be a key player in the field by 2030. Last year, the nation planned on investing 2.2 trillion won to further its AI industry, including a program for training talents in the computer software and AI sectors to address its technical skills gap. By 2022, their focus will be on developing core artificial intelligence.

Although there had been initial resistance due to its decentralized nature, nations all over the world are now deeming blockchain technology as necessary to push their economy to greater heights. Currently, South Korea is one of these countries making big investments in this emerging technology to not only boost its e-commerce sector but also become a leading hub in the industry.

The nation’s strong economy and high-speed internet and mobile connectivity, coupled with a tech-savvy market, presents an optimal environment for blockchain technology to grow. The government itself has expressed support for future blockchain projects. In 2018, it was announced that KISA and the Ministry of Information and Communication (MIC) were investing in six blockchain pilot projects worth 4 billion won, dedicated to enhance the public sector and to further explore the potential of the technology. As of this year, the number of projects has doubled with an estimated cost of 8.5 billion won.

The Seoul City government also announced that starting this year, a 123.3 billion won blockchain industry plan will be implemented around the East and West sides of Seoul as a means of promoting the private sector. This will be in the form of a blockchain complex that can host over 200 blockchain companies.

More recently, a pilot program called “Blockchain Technology Validation Support in 2020” was launched by two South Korean ministries to further support the blockchain industry in the country. The project aims to select nine projects through public offerings and grant each one up to $360,000 in funding, allocating to $3.2 million in total.
Additionally, more and more conglomerates in the country are adopting blockchain into their systems. Telecommunications network SK Telecom announced last year that it would be using blockchain to process subscriptions, payments, and real-name authentication. Other media channels have also started their own blockchain lines, like Kakao Ground X (Blockchain Lab), LINK Chain by Line (blockchain network), and Nexledger by Samsung.

Influencer marketing is a burgeoning industry in South Korea, which is largely due to the global success of Hallyu. As such, companies are making use of these online stars with over a 1 million-following base to increase their social media reach.

The prevalence of social media influencers in Korea stems from their loyal fanbase and more importantly, their image of relatability and authenticity. However, marketers must carefully choose which influencers to collaborate with. Influencers’ personas must be analyzed and their motivations and attitudes must be ensured to be in line with the overall message to be communicated and with the brand’s or company’s value.

The appeal with social media stars is also with their ability to remain prominent amid the constant flow of diverse online content. For instance, the most popular influencers review products extensively, to the point of developing creative strategies that companies would not have even thought of in the first place. This bolsters their appeal of candidness and fosters trust among their followers. Marketers can use this as an opportunity for brand awareness, more consumer feedback, and as an easier way to raise revenue for viral online posts. 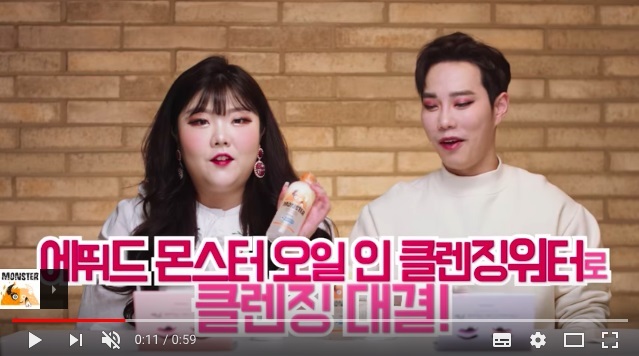 In February 2018 South Korean cosmetics giant Amorepacific collaborated with YouTuber Holy to promote a skin care product from Etude House, the company’s budget cosmetics brand. Success was instantly seen since within just four days from being released, the video had garnered over 630,000 views. After a month, it had further increased to 3.8 million views.

Wemakeprice, a popular online shopping mall in South Korea, also connected with influencers for the company’s marketing campaigns. The company started a new live broadcast program called “How much did you sell?” from Oct 23 to Dec 4, 2019, where influencers were invited to introduce innovative products from small and middle-sized companies. By the end of the show’s run, they sold more than 100,000 items because of the program’s online influence and reach.

South Korea poses a thriving environment for digital marketing and is one of the few countries to support startups. However, being aware of the constant emerging technologies and adopting them in strategies and business models is crucial to remain relevant in the country’s market. Some of the digital marketing developments that offer the most promising opportunities are AI integration, blockchain technology, mobile marketing, and influencer marketing. With the adoption and proper execution of these strategies, brands will be able to generate success for their marketing campaigns.

Talk to us at Info Cubic Japan today to learn more about online marketing in South Korea.