With a population of about 272.1million people, Indonesia holds incredible opportunities for local startups and foreign enterprises aiming to penetrate the market.

The rate of internet and social media use are rapidly climbing, with one survey recording 174 million active internet users in 2019 – an increase of 17 percent from the previous year. Indonesia is dominated by the younger generation, side by side a growing middle-and-affluent-consumer class, who are tech-savvy and eager to spend their money on purchasing new products and services.

This article will discuss Indonesia’s digital marketing environment, its biggest channels, industry challenges and opportunities, as well as the best possible ways on how to reach the Indonesian audience.

Indonesia is perhaps one of the most important internet markets in Southeast Asia due to its sheer size, developing middle class, and digitally savvy population. 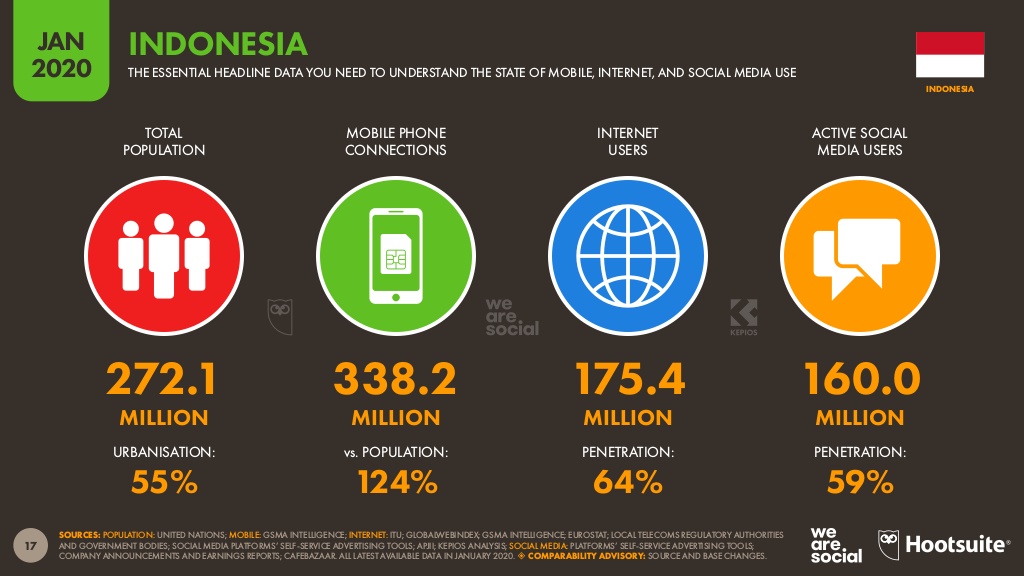 With more than half of the Indonesian population online, there is an enormous potential for e-commerce ventures, smartphone manufacturers, as well as brands building products to attract millennials in the country.

Amongst other countries in the Southeast Asian region, such as Malaysia, Singapore, and the Philippines, Indonesia may have a lower internet penetration rate in comparison. However, these countries have smaller populations and can’t compete with Indonesia when it comes to volume. In effect, these figures have enticed investors to take notice.

A study conducted by Google and AT Kearney found that venture capital activity in Indonesia has increased by 68 times in the past five years, triggered mainly by the rising interest in e-commerce and ridesharing. The total venture capital activity in the first eight months of 2017 was logged at US$3 billion – more than twice the figure for the entirety of 2016, which was US$1.4 billion. 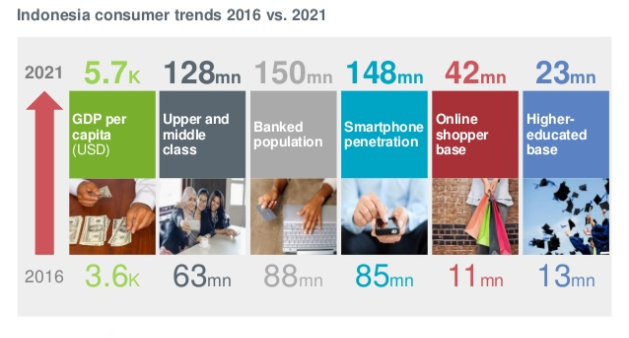 Indonesians are very active on the internet, with 66% of survey respondents in the We Are Social report saying that they log on to the web at least once a day. The average daily time spent online was 7 hours and 59 minutes, with roughly around 5 hours dedicated to social media and streaming music. 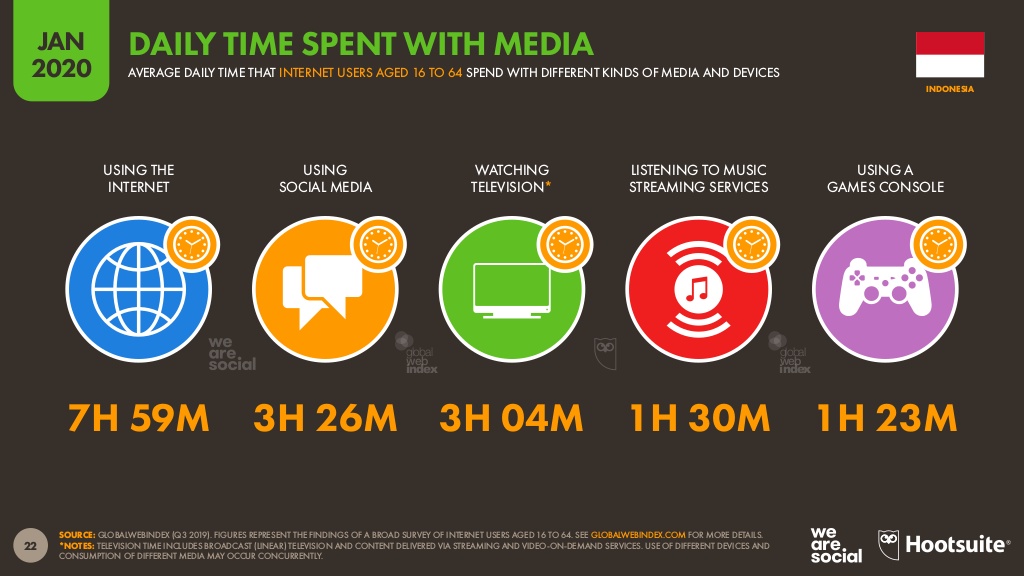 The bulk of web traffic in Indonesia are coming from mobile phones, enabled by the accessibility of inexpensive smartphones to the Indonesian populace going online for the first time, bypassing desktops and PCs directly.

Access to mobile has also initiated enthusiasm toward financial technology since only 48% of Indonesians own bank accounts and only 2.4% of them have credit cards. If e-wallet platforms are established successfully, there are 125 million mobile internet users waiting for easy banking.

Indonesians are also progressively using the internet for online shopping as a survey found that 93% of Indonesian netizens search online for a product or service to buy, with 90% landing on an online store, and 88% make e-commerce transactions at least once a month. 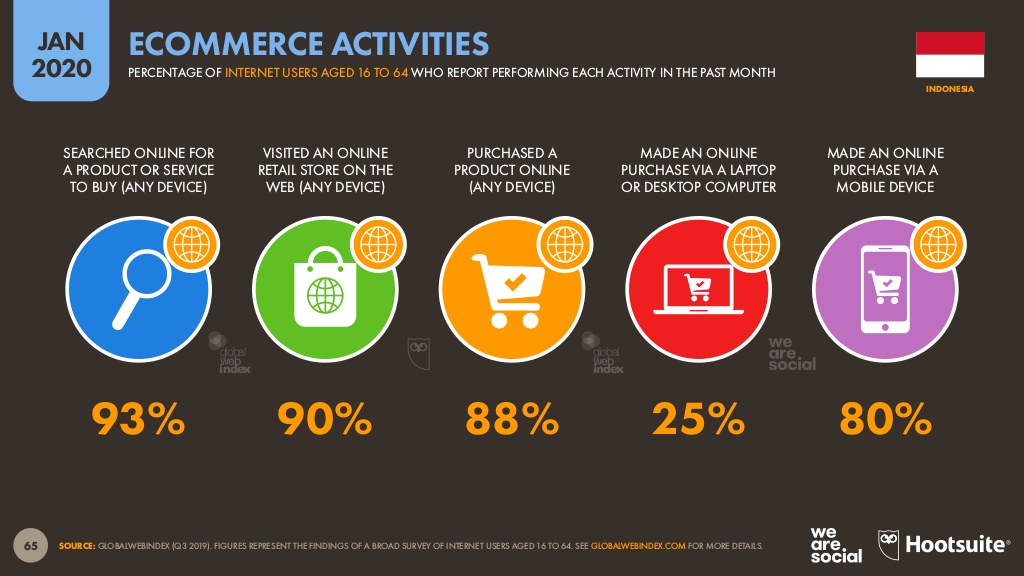 Based on these statistics, the Indonesian market still holds a lot of potential for growth. 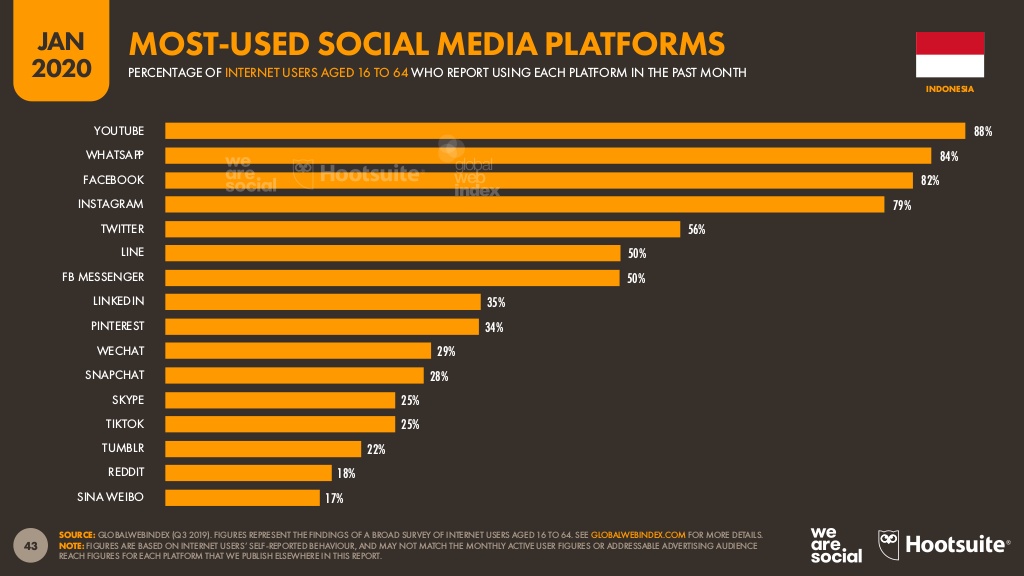 Results of a survey commissioned by market research firm Jakpat in 2017 indicated that 54 percent of Indonesians use YouTube to view content on tutorial videos. These results are in line with Google’s research, which found that in Southeast Asian countries like Thailand and Indonesia, being on YouTube has turned out to be a social activity that involves shared interests, such as viewing makeup tutorials. 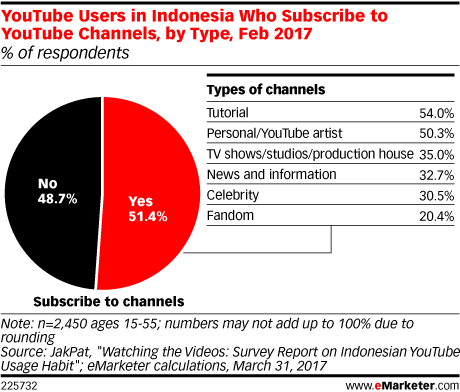 According to Statista, the most popular activity of Indonesians on YouTube by the second quarter of 2019 is watching videos, followed by liking or disliking videos and subscribing to YouTube channels. 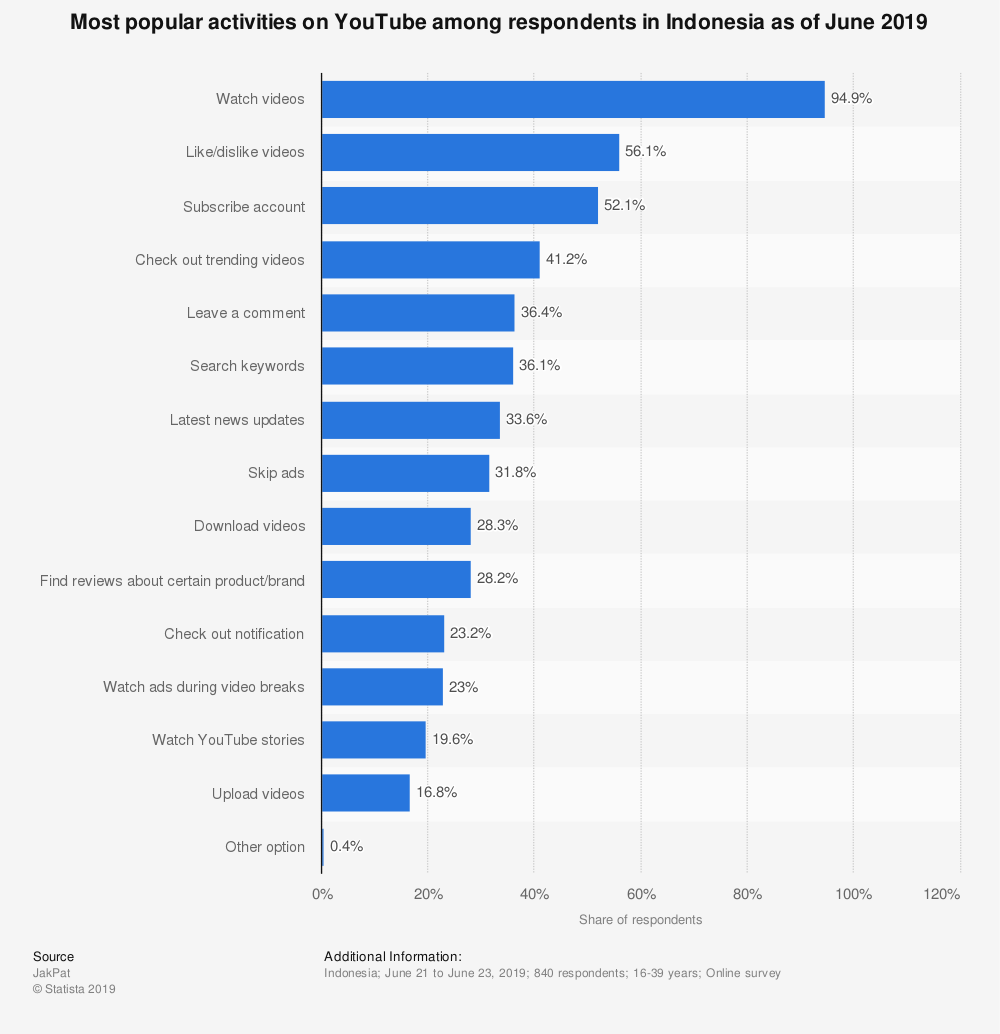 With over 130 million active users in 2020, businesses in the fast-moving consumer goods and e-commerce industries take up a major share of Facebook engagement. 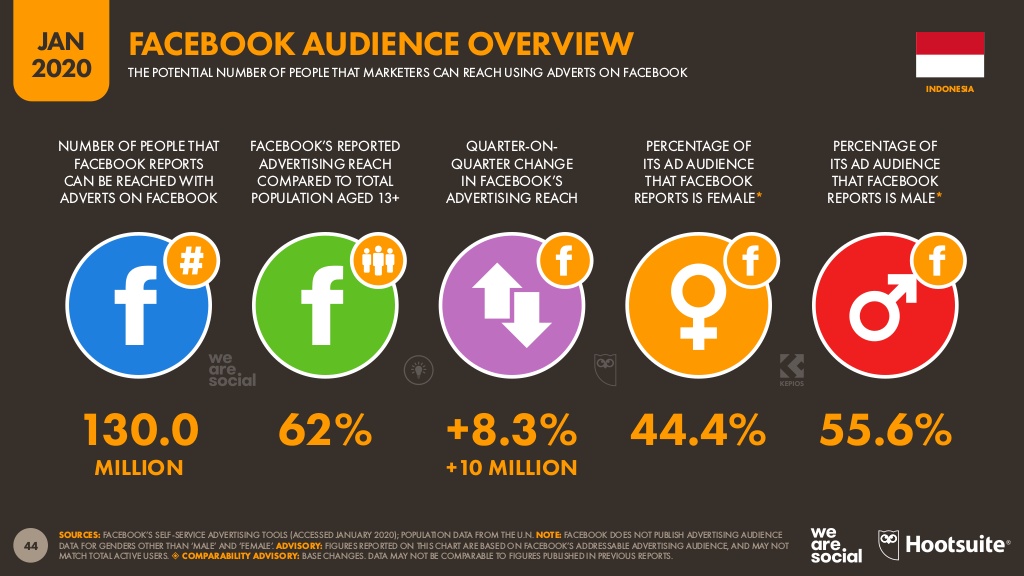 Among the other platforms listed, Facebook stands out as being the one having the most frequent daily use by Indonesians. Furthermore, Facebook also serves as a social marketplace and launching pad for buyers in the country, of which 130 million Indonesians can be reached with advertisements.

Facebook ads play a crucial role in social media ecommerce in Indonesia as 37 percent of Indonesian e-commerce buyers communicate primarily via social and messaging platforms to make a purchase. More discussions are even generated by these reviews as consumers use the platform to share their shopping experience and purchase.

The report by Hootsuite shows that WhatsApp outranks Facebook and Facebook Messenger apps when it comes to monthly active users in Indonesia. 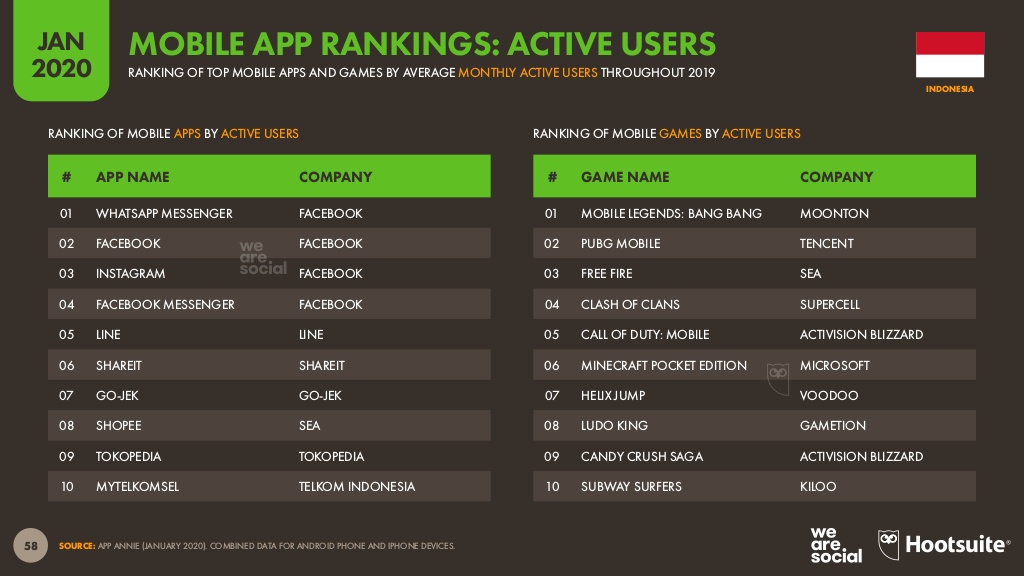 Since the release of the instant messaging service’s official WhatsApp Business app in January 2017, local businesses have been expected to use the platform in communicating with their customers. Moreover, due to its integration into Facebook and Instagram, social media users can easily make inquiries to businesses through WhatsApp, enabling marketers to build a list of high-potential leads.

Instagram is massively popular in Indonesia. As a matter of fact, the country ranks sixth in the world in terms of monthly active users.

Facebook, which is the platform’s parent company, also offers insights that could prove Instagram’s influence on shopping behavior. In fact, 68 percent of Instagram users in Jakarta, Indonesia use the platform to follow magazines and newspapers to get shopping inspiration.

In addition, Instagram Stories has also established itself in the Indonesian market. Survey results show that 65 percent of Indonesia’s business owners think Instagram stories allowed them to showcase their products and services in a new perspective.. This is due to Indonesians’ preference for Instagram Stories’ authentic and ephemeral nature, which lets them be “real” in their communications with friends and family.

In the latest survey by Hootsuite, Twitter beat LINE as the fifth most-used social media platform in Indonesia. In fact, Indonesia reached a total number of 11.8 million users in a survey done by Statista last April 2020. With it, the country became the ninth leading country on Twitter users. 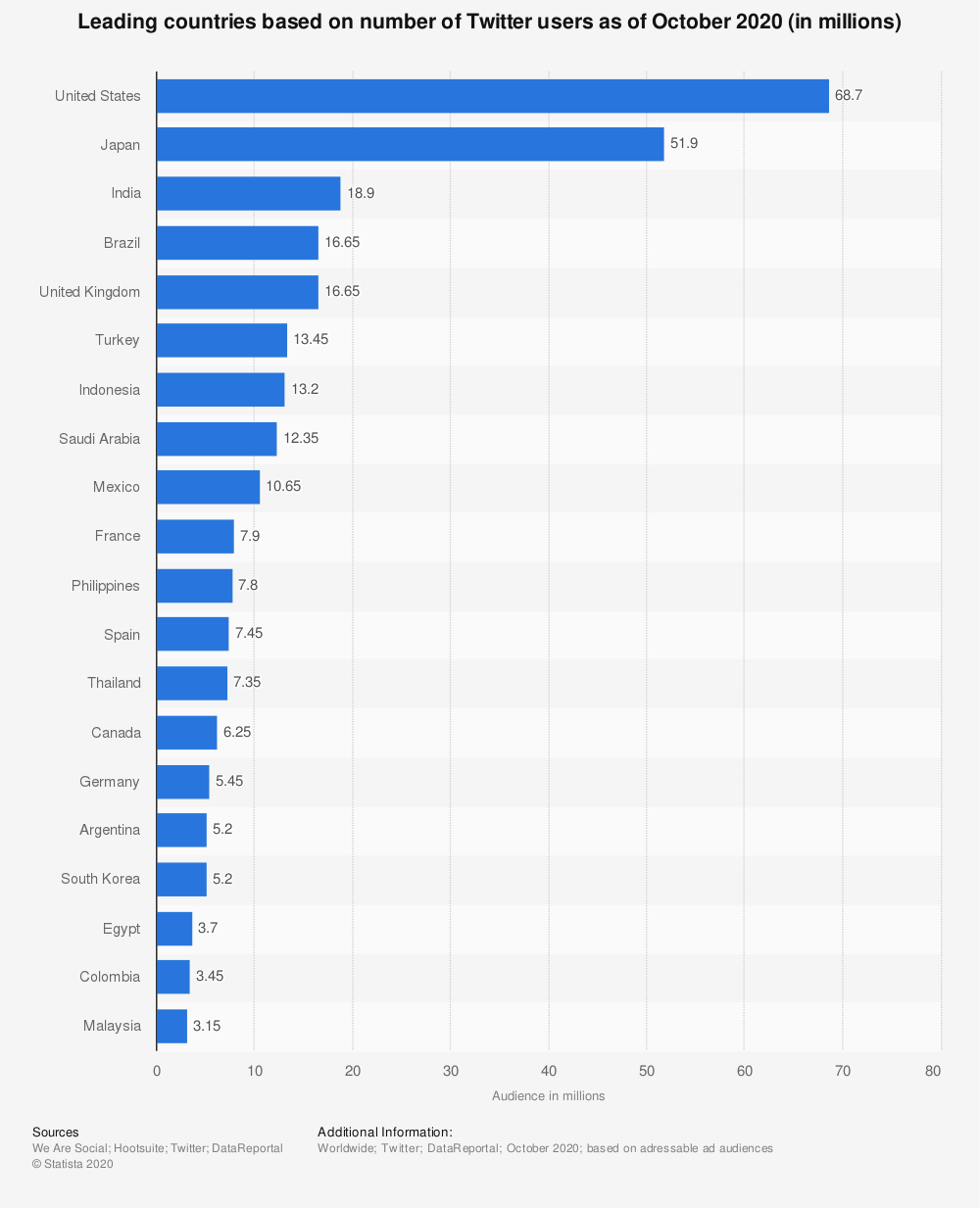 Indonesia also presents some distinct obstacles and challenges for business owners and marketers. For instance, being an archipelagic country means that 272.1 million people are distributed across 17,508 islands, each one with varying tastes and preferences. This extent of diversity suggests that marketing tactics that work in one city, such as the country capital Jakarta, may not necessarily work for another urban center like Surabaya.

As a matter of fact, a study conducted by McKinsey & Company indicated that consumer behavior in Jakarta is less likely to be influenced by branding and image in contrast to Surabaya. In addition, the consumers in Surabaya are also reported as more likely to seek recommendations from family and friends prior to making purchasing decisions, especially when it comes to fast-moving consumer goods.

Mobile marketing is the new frontier 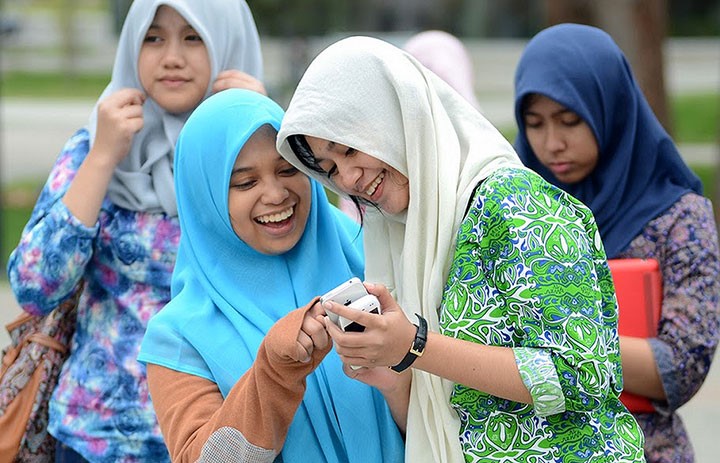 With over 175.4 million internet users, Indonesia is the fourth largest internet market by 2020 based on the number of users. Furthermore, a majority of the web traffic in the country is through mobile with 98 percent. Thus, Indonesia offers numerous opportunities for brands looking to connect to a new, mobile-centric consumer base, and it is also worthy of attention for other developing markets.

A study conducted by Google and Ipsos found that the rising usage of smartphones influences the shopping habits of Indonesians, and that mobile plays a major role in users’ online and in-store purchase behaviors. For instance, 98 percent of mobile users in Indonesia have researched brands and products on their smartphones, which often has an impact on their final purchases. Furthermore, 80 percent of Indonesians change their purchase decisions after consulting their smartphones.

Aside from having an impact on decision-making, smartphones have also changed the way Indonesians actually make their purchases with 59 percent of consumers making online purchases weekly and 39 percent doing so monthly.

In these circumstances, whenever consumers pick up their mobile devices with the aim of searching or making a purchase, brands have a tremendous opportunity to be present and be helpful with relevant content.

Since the COVID-19 pandemic, many people turned to the digital world to cope with what was happening. This surge of new and continuing internet users boosted the growth of digital marketing in Indonesia, and it will keep on growing aspeed according to the 2020 Global Ad Trends report by PubMatic.

The rise of video streaming in the country gave way for programmatic ads to be a trend in the digital advertising sector. It is projected to double this year. Video ads will also be one of the fastest growing ad formats in the country until 2021.

To sum it up, Indonesia has a flourishing digital marketing landscape that holds tremendous potential for both local startups and international brands. With a diverse culture and population, achieving success in Indonesia when it comes to digital marketing is not a simple task. However, companies can successfully penetrate the market by maximizing opportunities provided by Indonesia’s biggest channels, mobile marketing, and upcoming trends, as well as overcoming the challenges presented by diversity.

To learn more about online marketing in Indonesia, contact us today at Info Cubic Japan.