A Global View of SEM

According to the Global Ad Spend Forecast by DAN, there was a 1.7% change in online advertising spending when compared from 2018 to 2019.

Digging deeper and looking at the numbers by region,  Asia-Pacific decreased by 3%, South America by 2.5%, and West Europe by 1.9%. While  South America’s overall expenditure is still at a relatively small scale, the region saw a significant decrease in online advertising budget.

This and other data shows that in almost every continent, internet marketing is becoming an ever more indispensable form of advertising.

Online advertising expenditure was the only medium to pass the 10% mark.

Online Advertisement Expenditures around the World

Forecasters predict that growth will continue at an annual rate of at least 10% in the near future.

Global online advertising is expected to increase into the future.
Source: http://www.go-gulf.com/

When looking at global Internet advertising shares, Google, Yahoo!, Microsoft, and other search engines command more than 56.4% of the total market.

From Asia to many other nations and regions across the globe, budgets for search engine advertising are increasing significantly. 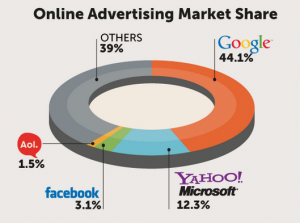 44.1% of the world’s online advertising market share is dominated by Google.
Source: http://www.go-gulf.com/

What’s more, when comparing different advertising media, it becomes apparent that search network PPC advertising is the most popular form: 49% of online spending goes to this format.

In a study conducted by comScore in 2010, it was found that the number of searches made per month topped 13 billion.

While the U.S. is the leading country for number of searches performed per month, if you were to add China, Japan, and Korea together, they would surpass that of the U.S.

In fact, if you look at Asian search volumes, it becomes clear that it is a region where both Asian and Western businesses can find success penetrating the online markets. 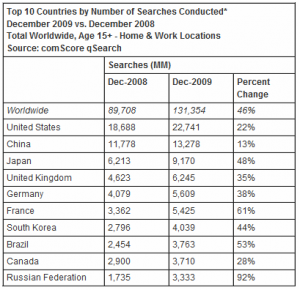 According to a study conducted by Hitwise, in 2011, Google was the most widely used search engine in the world, with a total share of 82%.

For some countries, though, Google is not the leader.

For example, China’s most popular search engine is Baidu, and it increased its share of the total global search engine traffic from 3.3% to 4.9% in two years.

This figure is expected to grow as the number of Chinese going online increases, and it will change the picture of the world’s search engine market shares.

Google possesses over 80% of the World’s search engine market share, but due to the increase in the number of Internet users in China, Baidu’s share of the overall market is expected to increase.

If you were to exempt China from the list of worldwide search engine market shares, though, Google becomes the favored search engine for most of the countries in the world.

Thus, we can say that global SEM essentially is marketing on Google, and that it demands a strong knowledge of how to conduct paid and organic search engine marketing through Google.

As noted above, Google controls the major share of the world’s search engine market; however, if you dig deeper, the picture becomes more complex.

For Asia, in particular, there are search engines other than Google that command a higher share of the market, such as Yahoo! in Japan, Baidu in China, and Naver in Korea.

All three of these countries have 2-byte languages.

Google, originating in America (with 1-byte English), didn’t handle the 2-byte language searches that were required in these Asian countries.

It therefore led to other engines capturing more shares of the market early on.

Many companies looking to pursue SEM in Asia have had difficulty succeeding because of this significant difference.

Indeed, even though Google has the highest overall share of the Asian market in its entirety, businesses penetrating the Asian market with only knowledge of SEM on Google AdWords has led to many exiting in failure.

What we always recommend, as a global online marketing agency, is to use consulting services or hire your own native speakers when integrating into these Asian markets.

For these countries, what is needed are Japanese, Chinese, and Korean professionals who can provide you the marketing, linguistic, cultural, and technical insight needed to be successful.

For those of you who do not have this type of native support, what I have provided in the following chapters is a startup guide to help you in pursuing your global SEM ambitions for the Asian online market.

Each chapter will analyze a country or a region in the continent of Asia, providing insight into the respective online markets, all in light of SEM.

Contact us at Info Cubic for help with your global digital marketing campaigns.