Is it Time to Start Thinking about Influencer Marketing?

What’s influencer marketing and why is it so effective?

The term “influencer” originates from the word “influence” and indicates someone who makes a large impact on the general public or on specific communities.

In this post, we will discuss various aspects of influencer marketing and provide recommendations on how to do it.

First, let us go back in time to the origins of online marketing.

In the past, many companies’ goal was to simply get their website to appear at the top of the search engine results pages in order to attract more traffic.

It was also common to rely on display ads on partner sites or portals for additional traffic and then on search ads on search engines.

When social networking services (SNS) came into prominence, display ads on these media were also used.

While all these advertising methods are still used today, nowadays the Web has become inundated with ads.

As a result, users have fallen into a situation where they received too much messaging or conflicting messaging on the Internet.

This either turns them off or has made them unsure about what information to trust.

Thus, many no longer have faith in the information that is paid and advertised by companies.

What is occurring now on a global scale is a return to the roots: word of mouth.

It is still the most reliable, trustworthy information, but now the scale is much grander.

The origin of influencer marketing is rooted in word of mouth and the notion that a target market can be influenced into purchasing a product by well-trusted influencers.

Influencer marketing around the world

“Word of mouth” marketing in Japan and other Asian countries primarily entails corporations directly approaching bloggers or vloggers and agreeing on compensation and the content to be produced.

In the U.S., on the other hand, influencer marketing campaigns are very advanced and are practically large-scale businesses unto themselves, involving celebrities who have massive numbers of followers on Facebook/Instagram, or YouTubers with a large amount of channel subscribers.

For influencers with large numbers of followers, there are plenty whose pay scale ranges from $30-100K or more.
They are earning sums large enough that it could pay for a TV commercial starring a well-known celebrity.

The magnitude is indeed enormous.

The high fees influencers charge are simply a product of the high brand status they have gained over the course of their careers.

When utilizing such expensive influencers, it becomes necessary to work with a trusted agency to make sure everything is planned and executed strategically, such as what kind of content will be produced, what manner it be created in, what kind of tracking will be implemented, etc.

Of course, there is no way to know if the level of sales achieved from a famous influencer’s campaign will justify his/her high fees, but unless you try you will never know.

According to data on influencer marketing, if executed appropriately, such campaigns can attain higher ROIs than any other type of marketing.

Some stats say that “investing $1 in an influencer campaign will return $5.78” (source: Influencer Marketing Hub, 2020). 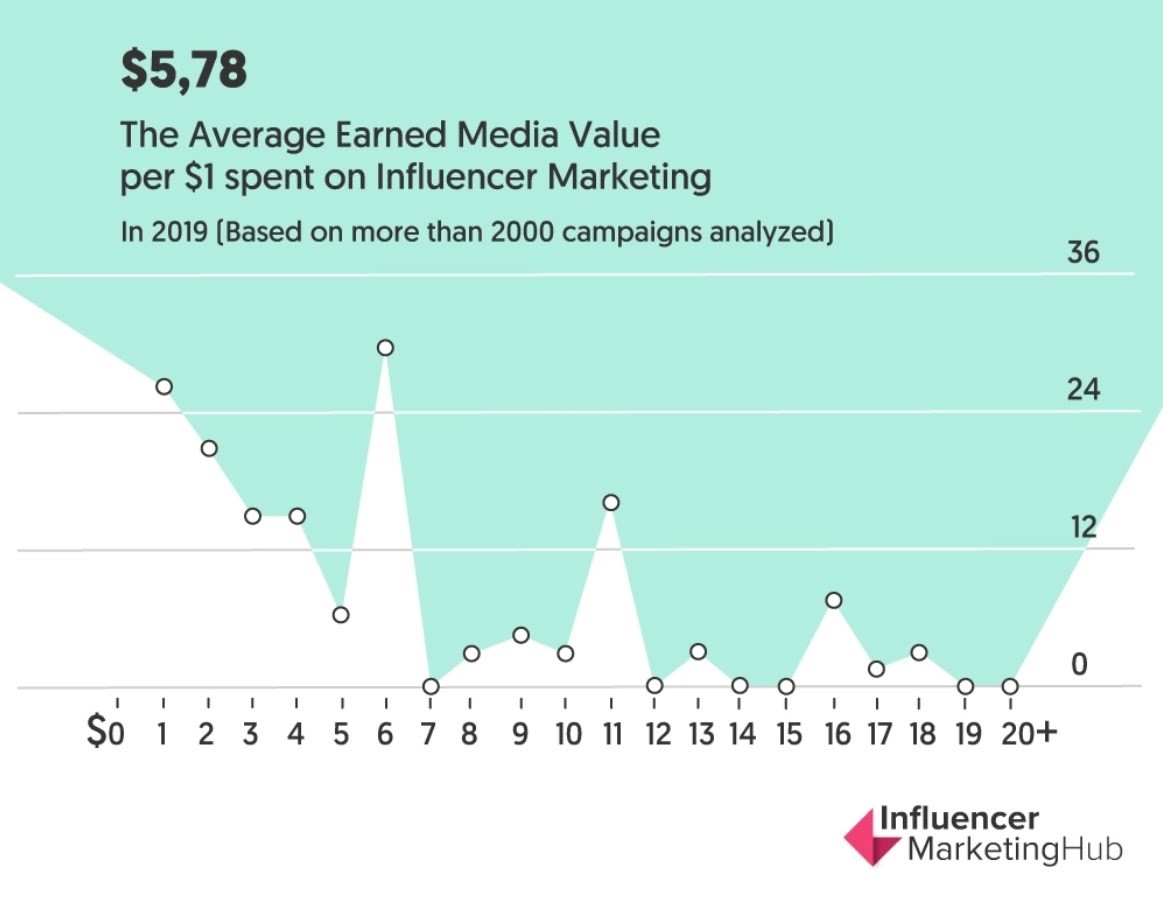 The following chart indicates (according to the EMV Index) what industries are a good match for U.S. influencer marketing campaigns.

While all of the data are based on the American market, these categories are applicable to almost any country.
For the U.S., though, the highest value returned was for entertainment.

In one campaign, influencers attended a massive 3 day music festival in Las Vegas, where they covered the entire event and created the social content that let fans experience the party virtually.

In second place comes beauty. In one beauty campaign, lifestyle influencers focused on beauty and natural products showcased in social media posts and stories of how they passed make-up traditions along to their daughters.

Now, a major method of marketing is to have influencers actually participate in tours and post their thoughts on videos distributed on SNS.

The brand image of a company and the current positioning of a product affect influencer campaign results to some degree, but generally speaking, new products from lesser-known companies are likely to benefit the most.

One reason for this is the psychological urge for people to tell others about new things or something they previously knew nothing about.

In general, new products proliferate first from the early adopters (people who like to buy new things).

These individuals are most influenced by innovators, the first group of people to be associated with a new product/service.

Utilizing Instagrammers and YouTubers who are followed by innovators will lead to influencing early adopters, which is overall the most efficient way to promote a new product and would provide more opportunities for a successful campaign.

[The 5 Phases of Consumers]

Doing such makes it possible to invest accurately in and make improvements upon future initiatives.

Start by reaching out to micro-influencers

The influencer marketing scene has drastically changed in just a short amount of time. A research done by Influencer Marketing Hub in 2016 revealed that for every 1 mega influencer with at least 1 million followers, there were also 3 micro-influencers with less than 100,000 followers available in the market.

For reference, having 100,000 followers is a general benchmark and the prices for influencers above/below this line change significantly. 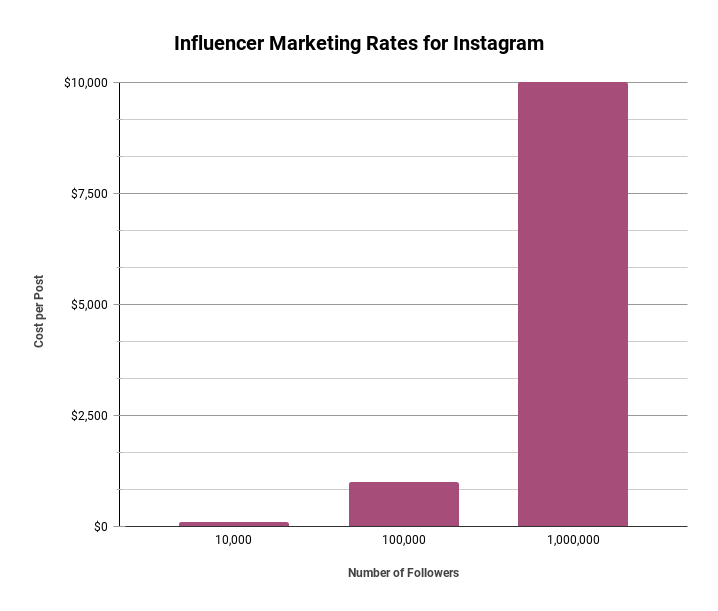 As influencer marketing is still a young field, it is important to select suitable goals for your campaigns.

Reasonable KPIs such as the total followers you will acquire from a campaign or the number of influencers you can utilize within a budget are recommended rather than trying to get large returns on your campaigns.

It is also important to execute your campaigns periodically, not just once.
However, unless you are a large corporation, it may not be possible to use many influencers multiple times for your marketing campaigns.

A more realistic approach would be to utilize micro-influencers who are not followed as much as the 1st tier influencers but still create good content.

In some cases, micro-influencers can be hired for as little as $100, making it possible to start campaigns relatively easily.

The truth is that even if you have enough budget, the idea that you should spend $20K on an influencer to create buzz is often too expensive and doesn’t bring significant results.

A more pragmatic recommendation would be to use several micro-influencers (who may have smaller follower numbers but high engagement indexes), thereby mitigating your risk.

A case of using influencer marketing to promote cosmetics

One example of an influencer marketing campaign conducted by our company was a promotional campaign for a world famous Japanese cosmetics company.

We used 5 influencers who created and uploaded YouTube reviews timed to emerge during a limited time sale it was running on its website.

We were able to use these analytics to report on the effectiveness of our campaign and subsequently develop additional promotional campaigns.

Not only did we conduct influencer marketing campaigns for our client, we also ran a variety of other marketing operations simultaneously, such as SEM, display and social, carefully tracking users at each touch point to see what particular channel the influencer videos had synergy with during the customer journey (e.g., whether they watched the video and then searched for the product to purchase it, or whether they visited the client’s social media pages after watching the video, etc.).

You need tools to support your influencer marketing campaigns

In markets across the world, there are many platforms that help you search for influencers.

Many let you search by area, media used, how many followers an influencer has, or even by the content of recent posts.

If you were to utilize these platforms in house, it would be necessary to register for a lengthy contract and fork out steep monthly fees.

This has often made it difficult for companies to start influencer marketing campaigns.

Here at Info Cubic, we make it possible to utilize these types of tools to find the most suitable influencers for your company’s brand, products and budget.

Contact us to inquire about how we may be able to help you with your influencer marketing campaigns.

View all posts by Masahiro Honda