The Cosmetics Industry in Asia: A Comparison of the Hair Care Product Market per Country

Cosmetics sales in Asia are on the rise

In recent years, exported Japanese cosmetics sales have continued to increase, and in 2016, it exceeded that of imports to Japan for the very first time.

Japanese cosmetics are highly popular in Asia (the region accounts for roughly 90% of Japanese exports) and many domestic manufacturers, such as Shiseido and Kao, have been increasing production to meet demand.

For that reason, we will be talking about the cosmetic industry in Asia, covering such topics as the demand for hair care products and the present state of exports and imports of cosmetics to and from major countries in Asia.

Being the second largest market for cosmetics after Europe, the Asia-Pacific cosmetics market is projected to garner $126.8 billion in 2020.

It is considered as one of the most dynamic and diverse markets in the cosmetics industry across the world.

We hope some of the information presented below will help you understand the market better and formulate your own marketing strategies for cosmetics in the region.

Just to note, the term “Asia” as used in this article refers to English-speaking markets in Hong Kong, Indonesia, Korea, Thailand, and other Asian countries.

The hair care market, in particular, is seeing growing demand for hair fall and anti-dandruff with active ingredients labels. This can be attributed to a global changing lifestyle pattern resulting in reducing nutrition content and growing atmospheric pollution levels.

Will Japan’s hair care market shrink in the coming years?

To begin, let’s look at the Japanese hair care market.

The graph below shows the total sales of the hair salon market in Japan from fiscal year 2012 to 2019 (in billion Japanese yen).

It shows that, for several years, the rate of growth has become stagnant.

Since there is no significant increase in domestic sales expected in Japan, retailers and manufacturers of hair care products will likely face commercial difficulty in the future.

Thinking about selling your hair care product in Asia?

Next, let’s look at the import value of hair care products for each country in Asia (the top 9 ranking countries).

The number one importer is China, while Australia ranks second.

The countries ranked third and below are Korea, Singapore, Indonesia, Malaysia, and the Philippines, respectively.

If businesses are to expand and develop in Asia, then their chances of success certainly lie in these countries.

Challenge the Korean hair care market with your product!

The value of imported hair care products to Korea has increased YoY from 2011 and 2015.

When this is broken down by country, Japan and America appear to command the highest share.

Exports from America have continued to increase from year to year, while Japan is staying strong but not growing significantly.

China and France are in close competition, surprisingly, but far from Japan or America.

As the market itself is experiencing a gradual expansion, there is surely value in testing the Korean market.

In recent years, Singapore has also been experiencing a steady increase in the import value of hair care products.

What is interesting about this trend is that, following “other” countries, Thailand’s share of the market is quite large.

The fact is that Thai beauty products are incredibly popular, particularly in Southeast Asia, and no matter which country’s import value breakdown you look at, the value of imports from Thailand represents a considerable percentage.

Although Thailand occupies the top spot among the exporting to Singapore countries, the value is experiencing a decrease YoY; conversely, imports from America are on the rise.

Japan, on the other hand, has seen a decline over the years, but has kept 3rd place.

For American, Thai or Japanese hair care products, there is still a strong market in Singapore it seems.

It’s no exaggeration to say that nearly all hair care products in Indonesia are imported from Thailand.

The reason for this is simply that these products are cheap and easy to import due to Thailand’s proximity.

It’s hard to justify buying products from countries other than Thailand for many Indonesians.

Japanese cosmetic products are known for being high in quality compared to Thai products, but they are of course more expensive, which is why the general consumer opts for Thai products.

America is also being overpowered by cheaper alternatives, but they will most likely be focusing on how to win in the Indonesian market through the coming years because of the market’s increasing size.

Similarly, Japan is also in the process of increasing exports to compete with America.

As the overall value of imports to Indonesia is trending downward due to a decrease in the export value of goods from Thailand, both America and Japan may have room to make more ground as competitors.

Though, as Indonesia is a developing nation, there is an increase in domestic supply as a result of a growing number of domestic brands, so the battle will be a tough one moving forward.

Thai exports to Malaysia are declining as well

Thailand maintains a strong presence in the Malaysian haircare market comparatively, comprising more than half of the overall import value, but is seeing its share fall YoY. Conversely, China, Japan and the US are keeping their shares stable. 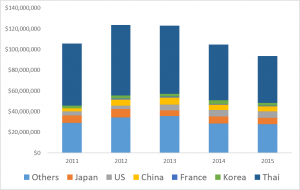 The hidden potential of the Philippine hair care market

It certainly cannot be said that the Philippine hair care market is a large one.

However, since 2014 the overall import value has rapidly increased and has shown much potential for growth, making this a market with hidden potential.

While both France and Japan’s existence is barely visible here, Korea, China and the US maintain considerable popularity.

As expected, even in the Philippines, Korea is a growing target of cosmetic interest. We could be seeing its popularity grow stronger in the future.

What will become of the export market of Japanese hair care products?

If you look at a breakdown below of the export value of Japanese hair care products per Asian country, while it increased considerably from 2011 to 2012, from 2013 it has fluctuated quite a bit.

It is very difficult to speculate how it will trend YoY moving forward.

Surprisingly, the country that imports Japanese cosmetics the most is Korea at 2 to 3 times that of Singapore (the country in second place).

There exists anti-Japanese sentiment in Korea to some degree as seen in the media, but demand for Japanese made products remains strong.

The country with most potential for Japan could be Indonesia, where, despite its low value, the export amount has been increasing steadily since 2011.

It is fair to say that we can expect positive trends in the near future.

Contact Info Cubic Japan today to increase the brand awareness of your products.

View all posts by Masahiro Honda