Digital Marketing in The Philippines

With over 360 million online users, Southeast Asia has one of the most rapidly evolving digital industries across the globe. Increased activity in social media, internet, digital media, and in mobile has demonstrated the enormous marketing potential that businesses can explore in the region.

Among the several digital economies within the region, the Philippines stands in the frontlines. With more than 73 million users, the country has ranked 12th in internet usage worldwide for 2020. The exponential growth of the Philippines’ very substantial digital marketing ecosystem in recent years makes the country very attractive to business owners exploring for opportunities within the Southeast Asian region.

This article will discuss the Philippines’ digital marketing environment, industry challenges and opportunities, successful campaigns, as well as the best possible ways on how to reach the Filipino audience.

The world is constantly changing: almost all industries are confronted with the need to realign their organizations to the shifting demands of the market, and thus, embracing the latest digital platforms has become a requirement nowadays.

In the Philippines, the digital marketing landscape is continuously growing due to the increasing number of Filipinos who choose digital channels over traditional media. This can be attributed to the majority of Filipinos’ affinity to the Internet, especially social media. In fact, among the country’s population of 108.8 million as of January 2020, there are over 73 million internet and active social media users. This accounts for 67% of the total population. In addition, there are also over 73 million mobile social media users in the country.

The Philippines is known for having the longest time spent in accessing media. Filipinos spend an average of 9 hours and 45 minutes using the internet via any device daily. Furthermore, the average daily time spent using social media via any device is 3 hours and 53 minutes.

Filipinos are also famous for being very active in social media with 73 million users. The most widely used social media platforms in the country are Facebook followed by YouTube. Other popular platforms are FB messenger, Instagram, Google+, Twitter, Skype, Viber, LinkedIn, Pinterest, Snapchat and WhatsApp. 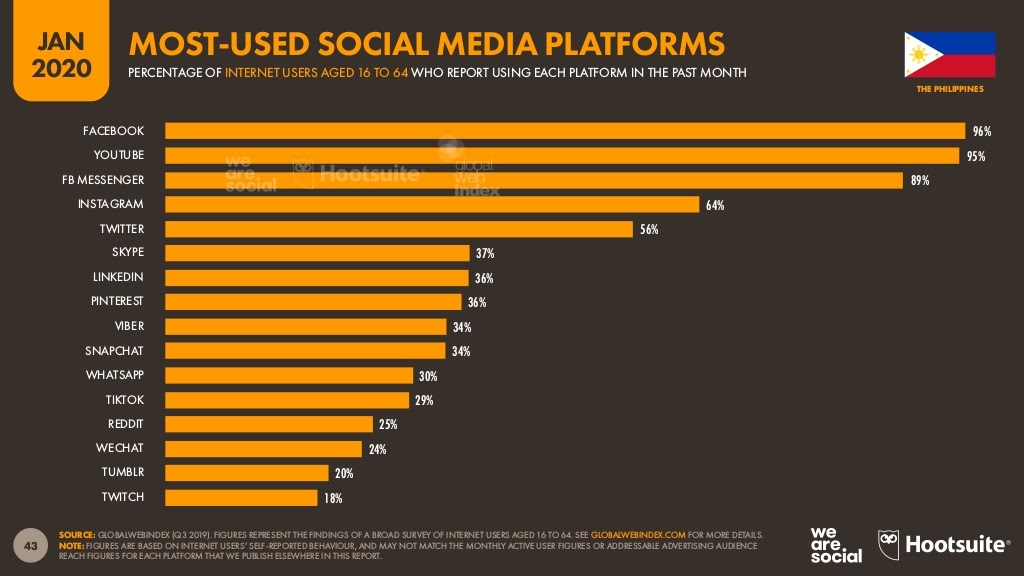 Despite the fact that traditional media still reigns in the Philippines, the rising influence of digital marketing cannot be denied. It is a constantly growing market that offers many opportunities. Therefore, it is important for both local and international brands to consider digital channels in their marketing campaigns. 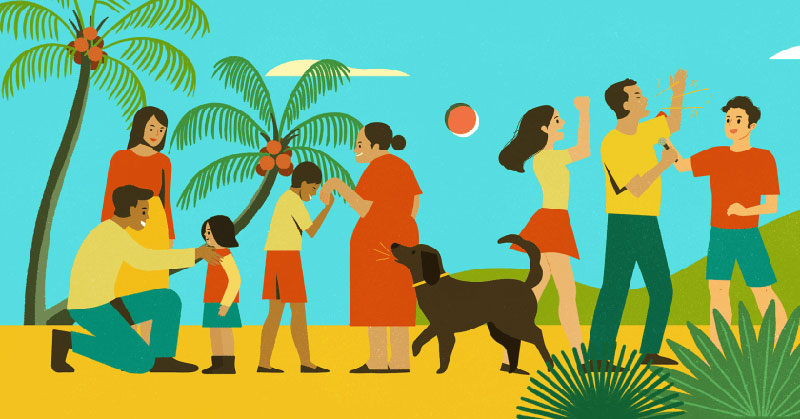 Due to its colonization by Spain and America, the Philippines has a rich history and diverse culture that is comprised of Filipino and Spanish Catholic traditions, with influences from America and other parts of Asia. Furthermore, the official languages spoken in the country are Filipino and English. Due to these circumstances, the Philippines is much more acquainted with and adaptable to a western approach compared to other countries in Southeast Asia.

The popularity of influencers and sponsored posts on social media have been triggered by two factors. One of these is the development of ad blockers. According to ad blocking authority PageFair, ad blockers enable over 300 million people across the globe to prevent display ads from disturbing their browsing experience. Another factor is the Filipinos’ acceptance and trust of brands on social media. A study conducted by Kantar TNS in 2017 found that about six in every ten connected Filipino consumers (59%) perceive the content they see on Facebook, Instagram, and Twitter as reliable. On a global scale, only 35% trust the information they see on these channels.

As mentioned earlier, mobile use is very widespread in the Philippines. Thus, marketers should not ignore mobile device users in their digital campaigns. To reiterate, the country has over 70 million mobile internet users, accounting for 64% of the total population. Moreover, Filipinos access the internet on their mobile devices for over 5.11 hours every day, according to the latest Digital Report by We Are Social and Hootsuite.

The growth of mobile shopping or m-commerce in the country has also been remarkable. Based on a consumer survey conducted by Mastercard in 2016, the Philippines posted the highest year-on-year increase in mobile shopping in the Asia-Pacific.

According to a survey conducted by GetCRAFT in 2017, marketers ranked video as the most effective content marketing initiative, beating other popular content formats like articles, infographics, and e-newsletters.

Looking back at recent years, videos were evidently the preferred content format among local fast-food chains. Two of the most prominent fast-food chains, Jollibee and McDonalds, have produced one sentimental video after another. Other brands adapted this trend later in 2017 with light and funny video advertisements, the most popular ones being Max’s unconventional video ad, and KFC’s search for the first Filipino colonel.

Videos that tell heartwarming stories that are easily relatable for Filipinos or something that could tickle their funny bone, will definitely be watched, liked, and shared. This would then certainly result in more exposure for such brands. 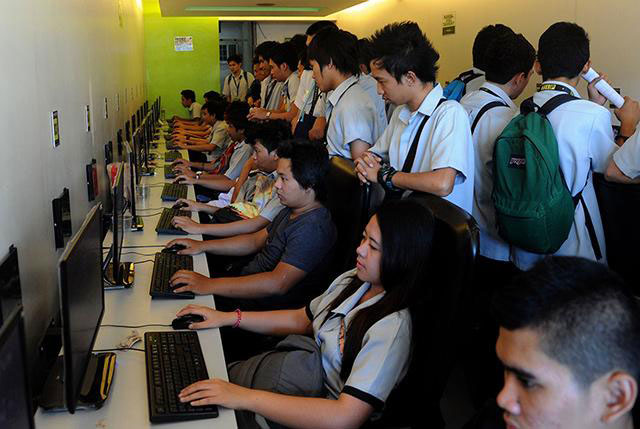 The use of big data in the banking and telecommunication industries emerged in 2017 spurred by the institutionalization of big data as a profession and the subsequent entry of big data professionals in the workforce. This is due to the inclusion of Big Data and Analytics subjects in the undergraduate business and IT courses of some universities in the country. In the following years, more industries are expected to invest in this revolutionary technology.

Utilizing big data is a great move for companies that strive to understand their customers better. Filipinos are known for being one of the heaviest internet and mobile users in the world, thus massive amounts of data can be collected to study their online behaviors. The more information a company has on its target market’s wants, needs, and dislikes, the better they can decide which marketing tactics will communicate their brand message effectively. 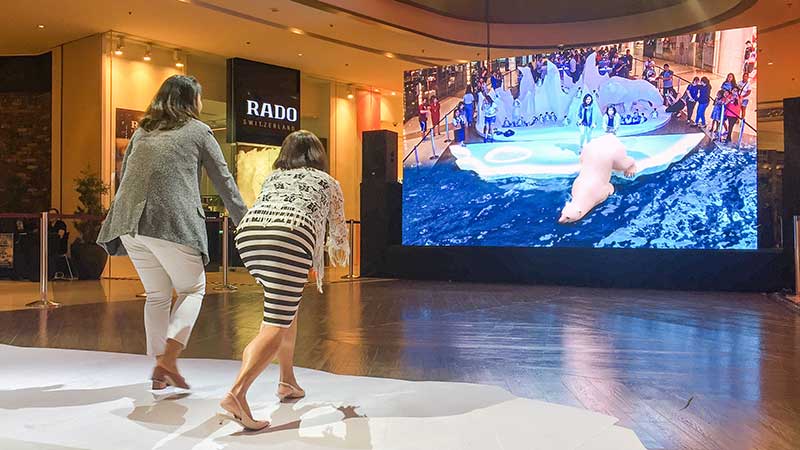 Augmented reality is an innovation in digital marketing that allows businesses to give customers a fresh, immersive way to experience their brand. This technology has been around in the Philippines for almost a decade. Shopping malls use it to attract more customers to patronize their facilities and for more moviegoers to watch in their cinemas. There are some major newspapers and magazines in the country that used augmented reality to save the decreasing readership. A local fast-food chain also used it to entice more people to visit their branches.

The use of Artificial intelligence (AI) in the Philippines is still under development, with financial institutions as one of the early adopters through chatbots. Nevertheless, these AI-powered computer programs are a game-changer in the communications between brands and consumers.

Back in 2017, two local banking institutions established their own chatbots that use Facebook Messenger as a platform. Even though their functions are more focused on customer service rather than brand promotion, chatbots are marketing tools that hold a lot of potential. For instance, consumers can make queries regarding the bank’s deposit account, credit card or loan offerings.

The greatest benefits of using chatbots are their convenience and speed. In just a few taps or clicks, potential customers can receive instant replies instead of going through the trouble of personally visiting a branch or calling a company’s hotline.

The use of chatbots can serve as an effective way to engage with customers due to the fact that Facebook Messenger is the preferred instant messaging tool for most Filipinos. However, despite Messenger’s popularity, it is not enough to sustain the customers’ interest. A worldwide survey commissioned by Amdocs in 2017 found that Filipinos preferred polite, smart, caring, fully customizable, and funny chatbots. Hence, the challenge for businesses that will choose to use chatbots is in developing them to behave, think, and seem like humans.

The bigger role of mobile marketing

While the majority of financial transactions in the Philippines are still made in cash, the number of consumers using digital payments are increasing. A study conducted on Visa Consumer Payment Attitudes revealed that 65% of Filipinos purchase with their smartphones and 41% make mobile payments at least once a week. Taking advantage of mobile payment and integrating it into a mobile marketing strategy can help businesses reach out to a broader customer base.

Furthermore, this method can prove to be more cost-effective in contrast with traditional media such as print ads and billboards. For instance, brands can create special deals via coupons or vouchers to customers who make payments for purchases using their phones. When those coupons or vouchers are redeemed, customer data which can provide insights as to when and how frequent they buy can be extracted. This facilitates better targeting and tweaking of ads based on customers’ buying behavior.

The Philippines has a thriving digital marketing environment that offers a lot of opportunities for both local and international brands. These opportunities can be maximized by establishing effective digital marketing strategies which include influencers and sponsored posts, giving priority to mobile, content marketing through videos, utilizing big data analytics, engaging with customers using augmented reality, developing chatbots, and making use of mobile payments to promote a brand. These are but some of the ways to penetrate the Philippine market amid the constant changes in the digital landscape.

To learn more about online marketing in the Philippines, contact us today at Info Cubic Japan.