Did you know nearly half of the world’s Internet users reside in Asia?

That’s right: 49.8% of the planet’s online community is in Asia. Numerous companies are increasing their investments in Asian economies, and it’s not just large corporations, but small and mid-sized businesses, too.

In fact, it is becoming much more common to see Western companies with Asian language websites.

By having an Asian language website, companies are able to market their business online in Asia via various channels, one of which is search engine marketing (SEM).

SEM is a popular, global form of online marketing that many Western companies have started utilizing as a means of reaching customers in Asia.

Search engine marketing is actually one of the best ways to market a business, so much so that I would say successfully entering Asian online markets nowadays without SEM would be nearly impossible.

Companies have realized this, and many have successfully ventured into Asia via this route.

Overall, the growing markets in Asia and the ease of penetrating them online via SEM shows that Asia is a business opportunity many shouldn’t ignore.

As Asian economies have grown during the last decade, so too has the infrastructure of Asia’s Internet and online advertising market.

When you compare these statistics to that of the rest of the developed world, it becomes clear that the Asian online market still has much room to grow.

Fig A: Distribution of Internet users by world region

Most of the growth in Asia can be attributed to increases in Chinese Internet use, and since China’s economy keeps expanding, its online population will continue to rise.

Regional Internet expansion, however, is not limited to China.

So, if you are considering promoting your business online in Asia, it is important to have an understanding of the makeup of online markets in different countries.

Only then can you expect to find success entering Asian online markets. 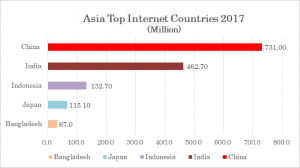 Fig B: Number of Internet users in Asia

India, which has the second highest number of Internet users in Asia, recorded 462,000,000 online participants in 2016.

While this figure seems high, India could have an even larger Internet population as that figure represents only 37% of the country’s population.

Nonetheless, the number of Internet users is growing each year in India, and its online market, like China, will certainly grow in the future.

Given that India and China make up most of the Internet users in Asia and that each country is likely to add more participants well into the future, it is obvious that online business in these countries will only grow stronger.

While India and China are the true giants of the Asian online market, the region combined is already the largest in the world and keeps on growing.

It has definitely become a market that’s capturing everyone’s attention.